Comment: In a bid to live more simply and eat more ethically does rearing your own livestock for sustenance raise more questions than it answers? A novice farmer responds 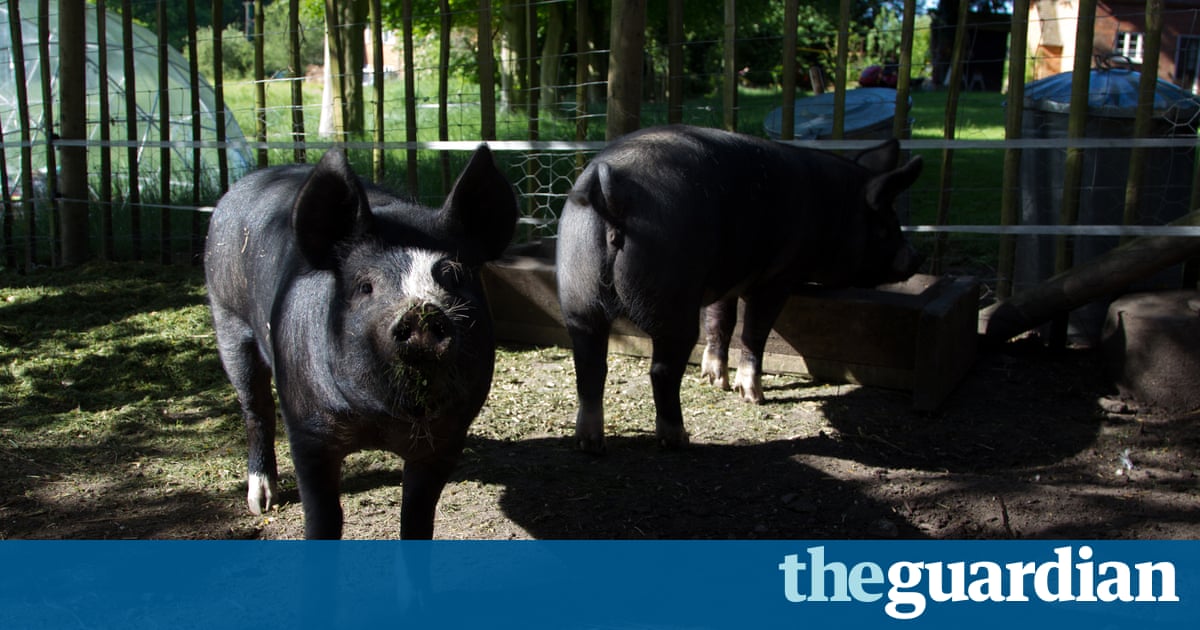 Have you eaten pork since they arrived? The question comes as I stare at my two 12-week-old piglets. I dont know. Did I have a sneaky bite of the supermarket chipolatas I gave the children for tea yesterday? When was that bacon sandwich?

Vegan psychologist Melanie Joy would describe me as a carnist. Its a neologism that means Im conditioned to accept meat-eating is natural and that animals are categorised into edible, inedible, pets and predators, rather than equals. Certainly, when I was a child, my mum who viewed the kitchen as a domestic jail reared me mostly on crispy pancakes and chicken kiev balls piled with salt, sugar and various meat-scraps of dubious origins. Since then, Ive moved on to veggie falafels and consume meat more carefully. Of course, Im not alone. Thanks to better education about the industry films such as Food Inc changed a generation our dietary habits are evolving. Although I dont believe were anywhere near to hitting peak vegan, plant-matter is now as cherished as flesh. Its not just evident in the posh restaurants: Tescos latest report reveals demand for vegan ready-meals is up 40% this year.

So, here I am, with my two new Berkshire sows, shocked I cant remember when I last ate ham; its a realisation of how I unblinkingly stuff comestibles into my gob. And it makes my mission to eat more ethically more pertinent. The plan is to butcher these two sows around November and spend the year living off them.

I left London three years ago, seeking a gentler life and a garden. Like many, Ive dreamt of growing and rearing the food I eat, of reconnecting with nature, for sometime. We moved to Hampshire and built a pigsty. We didnt act upon it immediately though instead, I got chickens, which generously lay eggs.

When a friend mentioned their smallholding neighbour had piglets for sale (40 each), I decided to face the thorny issue that had been niggling me for a long time: the morals of eating meat. The time had come to try killing animals.

The benefits of raising these two myself are threefold: I choose their feed, I administer their medication, if necessary, and I ensure theyre free to scamper. I love watching them, enshrouded in the verdant woods by our crumbling cottage, galloping figures of eight and snuffling through the terra firma. I even make them mud baths.

The question is, how do I feel about eating an animal Ive raised, cherished and enjoyed? At the moment, I feel a little tormented. For work as a food journalist, often waxing on about provenance, Ive visited a Portuguese familys visceral pig killing, Ive been scuba diving for scallops in the Hebrides and Ive fly-fished trout in Cornwalls river Tamar, but Ive never felt the blood on my hands as personally as this.

British philosopher Jeremy Bentham, a founder of utilitarianism, wrote in 1780: The question is not: Can they reason? Nor:, Can they talk? But:, Can they suffer? Can my girls suffer? Undoubtedly. Im convinced these two talk, too. Through pig language, grunts, pricked ears and high-octane tail wiggling, I understand happy, hungry, irritated.

Of course, Ive followed the farmers no naming mantra when rearing your own theyve no pet monikers although, occasionally I call them Bacon and Pat. Nevertheless, I feel uneasy guilty even when I learn that well-cared-for pigs naturally live 15-20 years: Ive been advised these ladies should be slaughtered at around six to nine months old. Wouldnt they want to live longer? Who doesnt?

The final part of their life is beyond my control and that also bothers me. Bacon and Pat will go to a local abattoir. They will be killed, disembowelled, split in half from rear to nape, then the still-warm carcasses will be placed in a cooler. Eventually they will be delivered back to me. I want to visit several of the nearest abattoirs to decide which one seems most compassionate. Note: Im not seeking a humane abattoir. Humane a word evoking a sense of qualities befitting the best of human behaviour is counterintuitive to me. Were talking about slaughtering beasts, who Im convinced would choose life if given the chance not be killed en masse in factory conditions.

While I watch these gregarious hogs racing to greet me, kissing and nibbling each other, or sleeping (they sleep a lot!) in their muddy oasis, Im slowly coming to a conclusion. Ethical carnism cant exist.

Apart from supporting British farmers another enormous issue morally, I cant see there is much justification for eating meat in this day and age, in this country. Its cognitive dissonance in all its finery. My atavistic urge to turn my pigs into bacon, to make the most delicious charcuterie, is at odds with the morality. I am conflicted. And that is only heightened by the obvious environmental impact that raising livestock has. Space to keep them on, the food (which they devour) … Im pouring sacks and sacks of pellets into my pigs wooden trough, which they turn upside down once empty.

A typical meat-eaters diet requires up to 2.5 times the amount of land than that of a vegetarian (and 5 times a vegans): eating meat is causing mass deforestation, generating the same levels of greenhouse emissions as all cars, planes and trains combined.

For now though, Ill keep chewing over these thoughts. Although my eyes have been opened, I dont feel finished as a carnivore (yet). I knew these complex feelings would arise Im not overwhelmed by them. The serious decision-making will start in autumn. November is a while off.

Chloe Scott-Moncrieff is a food journalist and co-founder of The YBF awards, celebrating new food and drink talent across the UK.