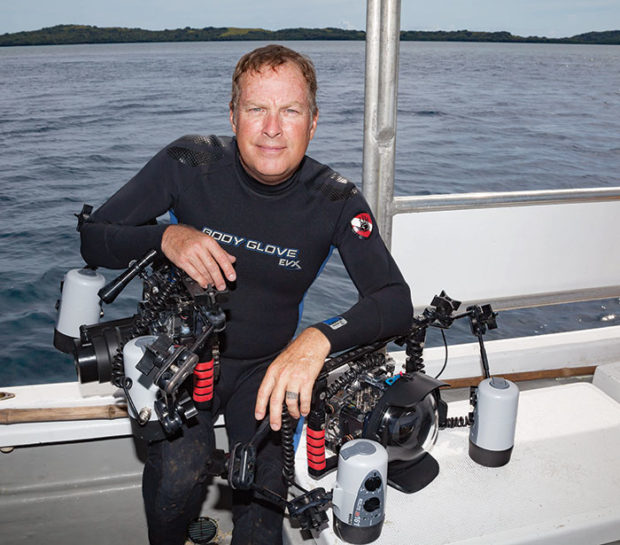 How long have you been diving?

I was certified in my last year of high school in 1976 in Oakville, Ontario. From there I spent three months in the Caribbean and came home (to no ocean) and moved out to Vancouver where I worked in various dive shops for a decade before continuing west to Maui where I have been since 1986.

What made you want to become a diver?

The Undersea World of Jacques Cousteau started the itch and once I took my first breath underwater in the pool I was hooked. My best friend in high school, Peter Fiell, finished his last semester at a private school on the island of Carriacou, which is part of Grenada. I purchased an Ikelite housing for my SLR and joined him after graduation. That sealed my fate.Â

I was waiting on the surface, drifting near Molokini Marine Preserve off Maui, waiting to get picked up by our dive boat when around 20 humpback whales came by. 19 males competing for 1 female. In her hopes of losing some of her suitors, she made a beeline for our vessel and arrived at about the same time I did.

âI have stuck with Canon cameras and Ikelite housings and strobes since I started in 1976. In the film days, I had Canon F-1âs and I am currently shooting Canon 5D mark4âs in Ikeliteâs Dry Lock housings with their DS161 strobes that utilize TTL exposure.â

Who is your go-to dive buddy?

My son, Sean. He is now 17 years old and I love to share the underwater world with him. He is interested in shooting video rather than stills and has opened up my eye to new possibilities.

What is your favourite dive site?

Darwin Arch in the northern Galapagos. Komodoâs Horseshoe Bay in Indonesia would be a
close second.

The east coast of Africa. I have seen some amazing images coming out of northern Mozambique.

Great white sharks. I have photographed them in South Australia, South Africa, and Guadalupe Island, Mexico. They are amazing animals and I canât seem to get enough of them.Â

âIf you are going to take pictures underwater, become a competent diver first. Get a good 50 dives under your weight belt before you go and add a camera to the mix.â

Fresh sashimi. I was doing a story on a new live-aboard for DIVER in the late 80âs. For the first three days, when we were cruising between sites, the chef would bring out a huge platter of raw ahi (tuna). On the fourth day I was ready and waiting at my table and out came a cheese platter. I must have looked disappointed. A few minutes later the chef stepped out of the kitchen and onto the back deck with a fishing rod and shortly thereafter he came back in with a fish. He looked at me with a grin and said, âI keep all my fish back out thereâ.

The Big Blue from 1988. It had me take up freediving seriously for a few years.Â

My 1991 cover on LIFE magazine is the largest feather in my cap. It was of a sandbar shark that I photographed off Lanai, Hawaii and is the only underwater image to make it onto the front of the magazine. My parents had it framed and hung it on the wall in the living room. I think it was the turning point for them, when they thought that maybe this diving thing is going to turn out all right.

Blackwater diving. I have been doing this for years around Hawaii and hope to get back down to the Philippines to sleep during the day and dive all night. They are capturing some amazing images there of the larval stages of marine life.Â